The Grand Canyon National Park runs for about forty miles along the sides of the widest and most dramatic parts of the canyon. The main road runs parallel to the canyon itself and there are various view points that you can drive up to. I entered the park from the gate by the ‘desert view’ area – the far end from the main visitor centre and, with hindsight, the best place to view the canyon from.

I paid my entry fee at the gate and made my way down the road to the above viewing point. The speed limit in the park was 45mph (as is the case with most National Parks in the US – it takes a very long time to get through Yellowstone!) and there were numerous small tracks diving down to picnic areas and ‘historic monuments’.

A few days ago in this blog I recalled how it was said that the first time you see the Grand Canyon it leaves you speechless.

It doesn’t matter how many pictures you may have seen of it, when you walk up to the edge for the first time it completely takes your breath away. The sheer scale and desolation of it is difficult to comprehend. It doesn’t seem possible that you’re seeing what you’re seeing – it’s almost a ‘does not compute’ moment. I saw some people spontaneously burst into tears when they walked up to it for the first time. The way you approach the canyon means you don’t really see it from the road – which makes the power of the ‘reveal’ all the greater.

I’m not going to try and describe it anymore here – I simply won’t do it justice. Instead, here are some pictures followed by some facts that might give you an idea of the size of the place: 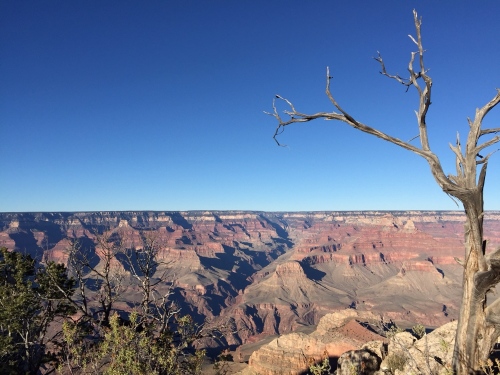 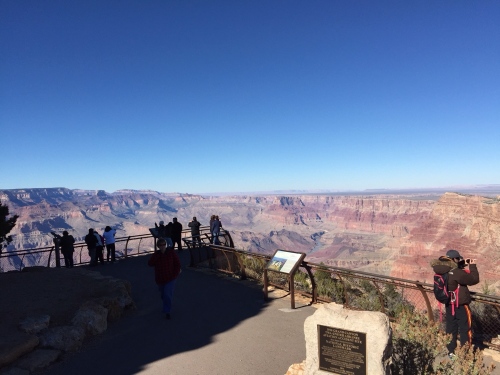 And what about the depth? As we’re in London let’s use The Shard as a comparison. Some of you may have been up to the observation deck on it – it’s pretty high. You can see the whole Greater London area laid out below you.

If the Thames were the Colorado then, at what height would the visitor centre I went to today be? One Shard? No.

Five-and-a-half Shards high. That’s from the river to the visitor centre on the rim. In some places this is an almost vertical drop down. That’s a very long way. If you dropped a coin off the top it would take eighteen seconds to hit the ground (count them) and would be doing 640kph when it did so.

There you go then. If the Thames were the Colorado the Grand Canyon would run from Penzance to Herne Bay, be at least half the width of Greater London wide and the surrounding land would be five-and-a-half Shards high.

If you ever get a chance (ie you’re ever in the American West), make sure you go and visit the Grand Canyon. It should be on everybody’s bucket list and has to be seen to believed. The National Park surrounding it really well-maintained and is packed full of bike and hiking trails – you could easily a spend a day or two exploring all the various viewpoints and another two days just staring and going ‘oooooh’.