Please don’t ask me when it is, but I’m pretty sure of where I am – and that’s back in the UK. I got up at around 7am Pacific Time and am now sitting in Heathrow having a coffee at 11:30 GMT, or 3:30am Pacific. In true style I didn’t sleep on the overnight nine-hour flight from Los Angeles and ended up watching four films back-to-back, which have now merged into one in my over-tired mind. (To summarise the plot: Eleven cyborgs are sent back in time from a post-apocalyptic future to conduct a heist on three Las Vegas casinos. Ten of them are killed in the process (and none of them find Sarah Conor) and the surviving one goes on to have a brief career as an abusive drum teacher in New York. He’s rapidly stuck off for his tendency to ‘terminate’ band members who don’t meet his exacting standards and is exiled out of the US to the Australian desert, where he gets a ridiculously souped-up oil tanker and goes slightly mad while fleeing from a guy with the world’s best electric guitar / flame-thrower.)

I’m hoping the coffee will steel me for the hour tube journey into London to catch my train back up north. It seems as if I’ve been away for months. I was trying to remember earlier the incident with the snow-plough when I was driving to Flagstaff – but that seems like it happened a lifetime ago. This is always the way though. I’ll go back to work tomorrow and greet people as if I haven’t seen them for an age, in response to which I’ll get a puzzled look and a “Weren’t you just here a few days ago?”. I know as well that, by this time tomorrow, all of this will seem like a distant memory. That is also, always the way.

Nothing particularly exciting happened on the flight back – except for the fact that it had wi-fi.

It’s odd isn’t it? All those films in the eighties and nineties about ‘the future’ and none of them accurately predicted the ridiculous ability we now have to communicate with anyone and everyone, anywhere and anytime. Every hotel I’ve stayed in has had complementary wi-fi, even the ones nestled in the Colorado mountains. But the fact that I was able to sit in a pressurised tube, 36000ft above the Atlantic and communicate with people on Whatsapp is nothing short of crazy. If you start thinking about the technology involved with installing the equipment on the plane, maintaining a constant link to a satellite network and then navigating the message you send back down to a particular handset in a particular country that could, in theory, be anywhere in the world – it’s, as I said, crazy. If you described this technology to people thirty years ago they wouldn’t have thought it possible. A hundred years ago they would have thought you were a god. They would have talked about the endless possibilities opened up by instant mobile text, voice and video communication with anyone on the planet. But I can guarantee you that none of them – none of them – would have foreseen that this entire global communications grid would be built up solely to facilitate the transmission of increasingly complex pictorial humour relating to cats.

Anyway, I must go and brave the tube now. I’ve finished my coffee and the freestyle jazz that’s playing in this Café Nero may cause me to do something reckless (early retirement?). I suppose the jazz is better that the transcendent choral music that now seems to be a staple of all the men’s toilets in Heathrow Terminal 2. (I don’t know what that is all about but, for a moment, I thought I had walked into a chapel. I imagine that it’s meant to be calming after a stressful flight but, to be honest, it’s just a bit odd. You stand by the hand driers expecting to be raptured.)

I’ll post some more on here in the coming weeks as there are some stories that I haven’t had a chance to tell. For now though I’ll leave you with a picture from yesterday. To my overly-tired (and rapidly failing) brain I can only assume from this picture that a) I visited Mars and b) There are now roads on Mars. 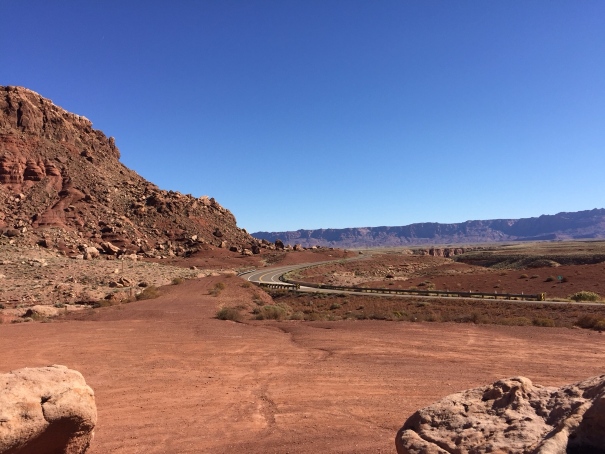