For a brief moment after we arrived in Dulles I thought the plane was on fire.

Slightly weary after the nine-hour flight from Geneva to Washington DC (Dulles), I was wandering forward to disembark from the back row of economy class when I was suddenly hit with a wall of heat. It stopped me in my tracks. It was as if someone had pointed a super-sized hairdryer at my head and turned it up to maximum. My sleep-addled mind couldn’t comprehend it and immediately defaulted to ‘Oh, the plane must have overheated’ before recalibrating a few seconds later as I realised that heat and humidity was, in fact, just Virginia in August finding its way in through the open cabin door: Thirty-four degrees and full sauna mode.

Washington Dulles is an odd airpot. I hadn’t arrived there from an international flight since my first foray into the United States some ten years ago and had forgotten just how strange it is. When the archtects designed the international gates they didn’t feel inclined to connect them directly, by any walkways or monorails, to the main departure and arrival terminals. When you arrive you are directed down a series of corridors before arriving at what-looks-like a wall of elevators. You hang around there for a bit before some of the elevator doors open and you’re herded through them into what can only be described as a single-decker double-decker bus. Try to imagine what would happen if you took a usual London double-decker bus, removed the lower deck, kept the upper deck suspended at the same height as before and then made it twice as wide. Oh and added two aerofoils protruding directly from the bus roof, like an upside-down double-rudder. Picture that. Strange, isnt it? This mutant plane-bus hybrid ferries you across the tarmac, dodging real aircraft in the process, to the US customs internment and trial hall.

I call it that for a reason: In all the times I have arrived in the US the worst queue through immigration I’ve ever experienced was in Newark NJ, at a shade under two hours. Today Dulles took that record and smashed it to pieces. The queue at Dulles this afternoon was such that, when the people on my flight first caught sight of it, all the British travellers felt the need to remark to each other about how impressive it was. Some took photos. One felt the need to take out a sketch book. Others just stood back and marvelled at it for a while. The British like a good queue.

After two hours the novelty started to wear off. Muttering began. Watches were looked at. Conversations about the queue became more frequent and intense. Panoramic mid-queue selfies were taken. Loud phone calls about the impact of the queue on the rest of the day’s plans were made. 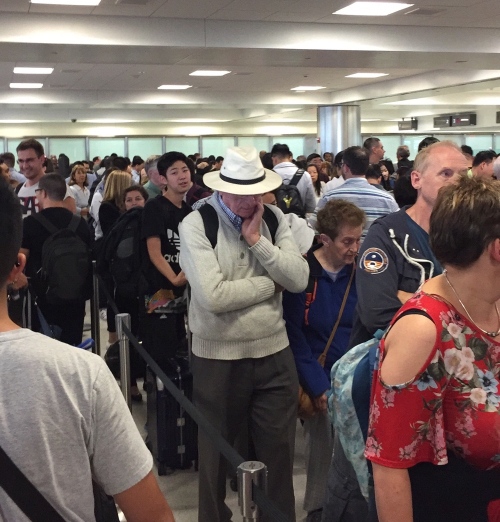 As two-and-a-half hours approached I became convinced that the only reason the queue was moving forward at all was because the people near the front kept expiring. With three people having already collapsed while queing this was perhaps closer to reality than you might first think.

Three hours and five minutes after my flight landed I came out the other side of immigration. The delay was such that my checked bag had been moved to the ‘lost property’ area in baggage reclaim. Knowing I still had a two-hour drive ahead of me I dragged myself out into the heat to find the rental car place. But of course, this is Dulles. And in Dulles they like busses. So the only way to get to the rental car place, a mile away, is by shuttle bus. Which you have to queue for.

This is all well-and-good assuming that the road access to the shuttle bus terminals hadn’t been blocked off by the police due to a sizable car accident, which it had. So there were no busses. And the queue got longer. It was almost as if the staff at Dulles were taunting us as the busses that should have been picking us up were diverted up over a flyover just in front of us so we could watch them going round and round in a loop, while we baked in the sun. After thirty minutes a group of middle-aged men from New Hampshire, who looked as if they were late for a business meeting on a golf course, announced that they were going to ‘walk to the rental car place’. This drew gasps for the assembled queue-line. Not only was it ‘almost a mile away’ but, as there are no sidewalks at all around the airport, it involved walking a fair distance along the edge of an elevated freeway. We bode them farewell and they set off into the haze.

A few minutes later myself and a group of individuals from Texas decided to try a different approach. I’ll spare you the details but, suffice to say, once we’d successfully scaled the flyover we were able to force one of the ‘on-a-loop’ busses to stop, pick us up and take us to the rental place. There was much excitement as, halfway to our destination, we came across the pioneer golfers wandering with their luggage along the elevated freeway. With much honking of the horn the bus stopped by each of them to pick them up and allow them to have a slightly cooler route to their rental cars.

I picked up the car and drove the hundred-odd miles down to my first stop, in Tappahanock, Virginia. It’s now gone 22:30 local time and I’m sat in the local ‘bar and grill’ struggling to stay awake almost twenty-four hours after I got up this morning. Tomorrow I’m heading to the coast, and North Carolina. I’m hoping that maybe, just maybe, I won’t have to queue for anything. 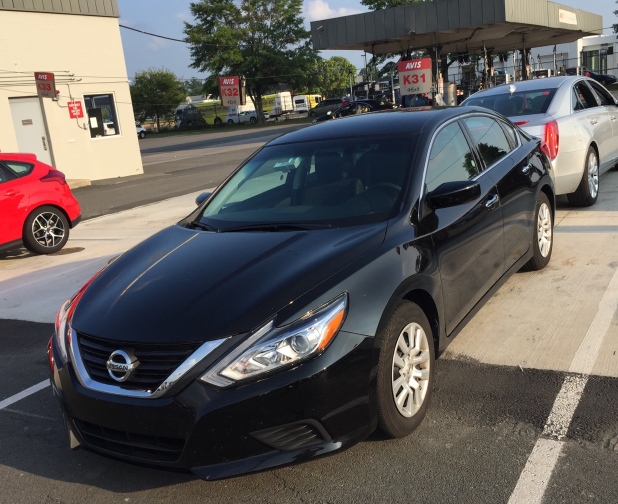