(Or: What happens when an international army of eclipse watchers descends on small-town USA). 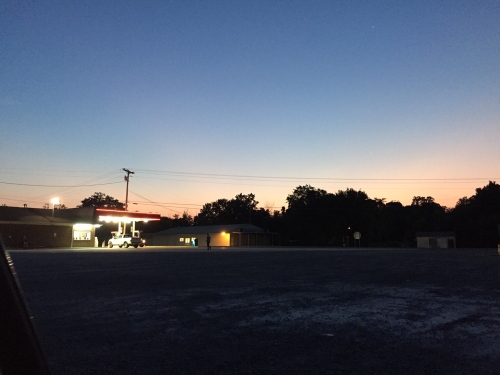 The first few evenings of my trip to the states were spent trying to figure out where it would be best to watch the eclipse from. There were a number of factors that fed into this, some of which I’ve previously discussed. It had to be somewhere that was as close to the centre of the totality shadow as possible while not being next to a major population centre. Spring City, Tennessee, had always been near the top of the list but, as the day approached, it became clear that quite a large number of people were having similar thoughts. I spent more time than I’d be happy to admit scouring satellite photos of the town and surrounding area to find somewhere ‘out of the way’ that still had some kind of amenities present.

There are many stereotypes about Americans that aren’t true, but the one that is is that the average US citizen will always try to park as close as humanly possible to their intended destination. This simply seems to be a cultural thing that isn’t helped by the fact there are very few sidewalks (read: none) and, in many areas, simply no way of crossing the multi-lane highways that doesn’t involve closing your eyes and hoping for the best. For this reason I was working on the theory that the town centre of Spring City would be packed with people and their cars / trucks / RVs. Now I use the term ‘town centre’ very loosely. Get any images of open squares and town halls out of your minds: Spring City is a small, very small, settlement in rural Tennessee. It has a population of less than two-thousand and the ‘town centre’ is essentially a large intersection with a number of gas stations and restaurants surrounding it. The estimates for the day were that anywhere between fifteen and sixty thousand people would be descending on this town – and all of them would likely drive straight to that central intersection and set up shop.

The eclipse, however, hadn’t taken Spring City by surprise. From looking online beforehand it was clear that a lot of local thought had gone into what was going to happen on the day and how the community could best benefit from the celestial event. The town’s ‘veteran’s park’ and a number of surrounding fields had been set aside as a viewing area and the school bus fleet was being commandeered for the day to bring people in to the viewing area from a number of designated ‘parking areas’ on the outskirts of the town. One of these parking areas was a large gravel area and field surrounding the ‘Big Apple Mart’ grocery store and gas station to the north of the town. I decided that this was where I would go: It was out of the way, had a source of coffee and was also dead centre on the line of totality. I could either stop and view the eclipse from there or get one of the busses into the official viewing area.

I’d noticed over the previous days, while driving around the Smokey Mountains, that the closer you got to the path of totality of the eclipse the more enterprising the locals became in taking advantage of the business opportunity. Everywhere you looked there’d be signs advertising eclipse glasses for sale, RV parking and hook ups or, at the most basic, a drive to park your car on. As the day of the eclipse got closer the costs associated with each of these options seemed to rise. As an example: Eclipse glasses were available for $2 online a few weeks before the event. By the day before the eclipse the cheapest you could get them locally was $10 and, on the day itself, there were people selling them for upwards of $25.

As I approached Spring City on that cold, clear morning it was clear that the locals had kicked the entrepreneurial spirit up to another level. I had to drive through the centre of the town (albeit at 6am) to get to where I was going to park up for the day and almost every house had a sign outside of it proclaiming some eclipse service for a fee. I think the best one I saw (and honestly, I kid you not) was a house that had set up a double water-bed on the front lawn. For $50-a-head you could lie on the water-bed for the duration of the day and watch the eclipse while being waited on hand-and-foot by the house’s inhabitants. I loved the fact that they were advertising it on a ‘per head’ basis. Unfortunately I didn’t get the chance to go back at the end of the day and see just how many people they’d managed to cram onto that water-bed!

The ‘Big Apple Market’, where I parked up at just after 6am, had also been thinking about the eclipse for a while. They had set up a dedicated parking are in their gravel lot, with small marques where you went to pay the parking charge of $5 and could also buy bottles of water, eclipse glasses and custom-printed ‘Big Apple Market Eclipse’ t-shirts. While the owners had obviously been planning for the event I think they were still taken back by the scale of it. From 7am onwards there was a constant stream of cars, trucks and satellite tv wagon racing down the single-track road that led into the centre of town. The parking lot at the ‘Big Apple Market’ soon filled up and they had to expand operations into the nearby field.

The small grocery store, that usually only catered for a couple of weary truck-drivers each day, had a queue out the door from 7am until the time of the eclipse itself. The first time I went inside to buy a coffee and some food the cashier at the till was telling everyone how she’d just had a man in who’d driven ‘all the way from New Hampshire’. Her reaction when I told her that I was from ‘England’ was a mixture of shock and disbelief. When the family two-behind me in the queue announced they’d come from South Africa I think it was all a bit too much.

As the day went on and people kept flowing into the town other business and homeowners started wanting to get in on the money-making act. Opposite where I had parked there were a couple of timber houses and a small church and parking lot. The owners of these properties had been sitting outside on their verandas watching from their rocking chairs as car after car paid $5 to park behind the ‘Big Apple Market’. By about 10am they’d had enough: They gathered themselves together, had quite a lengthy discussion, and then went indoors.

Ten minutes later they returned with several large pieces of cardboard advertising parking for sale and a megaphone. For the next hour we were all treated to a comprehensive but repetitive sales pitch about why anyone driving past should pay to park in the church parking lot. Some of the better lines were:

“We’ve got all y’all parking needs here. Anything you want. You park, we provide.”

Over the course of the hour they manged to attract a grand total of zero takers for their paid-parking scheme. Now I’m not an economist, or marketer, but there were a number of small factors that may have contributed to this:

Eventually it dawned on these men that their business model was, maybe, not a goer so they retreated back to their verandas muttering about people ‘not knowing a good offer when they saw one’. They watched as more and more trucks turned into the parking lot and field opposite and the area became a patchwork of trucks with tailgates open, small marquees, telescopes and BBQs. As the sky started to darken they advanced out from under their verandas to get a glimpse at what was going on. At this point the ‘Big Apple Market’ had the last laugh, despatching two of their branded school-children to sell some marked-up eclipse glasses to their former rivals on the other side of the street.